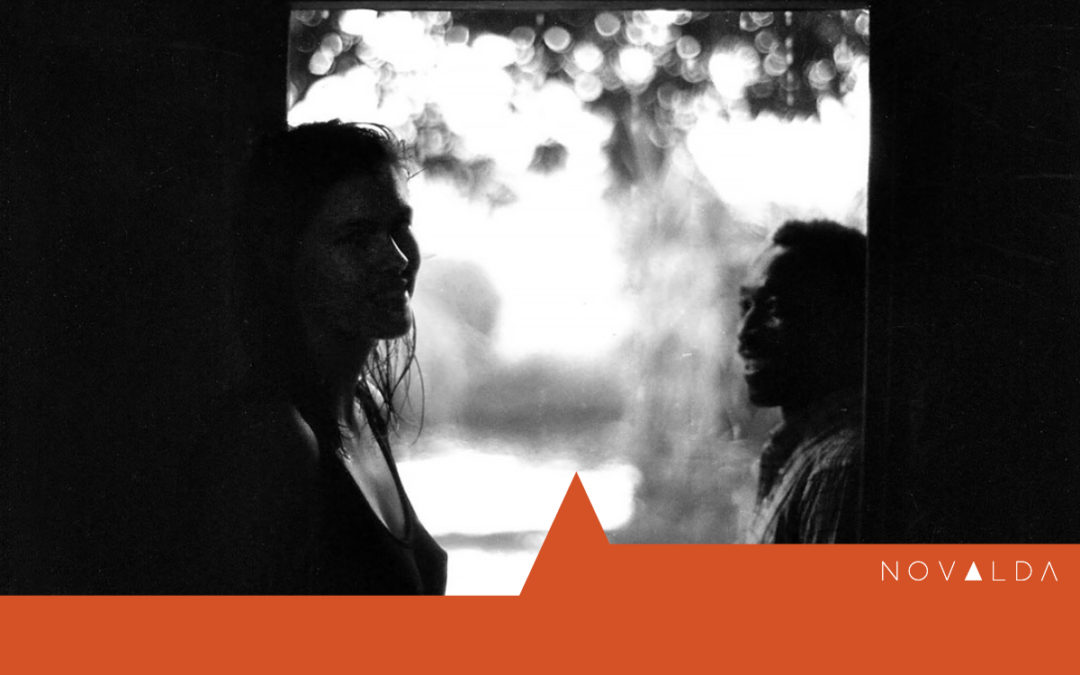 “The real voyage of discovery lies not in seeing new landscapes, but in having new eyes.”

For four magical years, I lived in a mud hut in Tanzania, working with a non-governmental organization on changing roles in forest management. Surrounded by the majestic forests of the East Usambara Mountains, I revelled in the differences, a contrast so vast for my twenty-something mind to grasp. I often had difficulty believing my hometown in the north of England could co-exist in the same timeframe.

As with the systems coaching I do now, the people I worked with were the experts on their own system. My role was not to teach or give advice, but to facilitate learning and action. I helped to foster the local communities’ knowledge, awareness, intention and skill around the relationship to forest resources. I was the expert on bringing out their collective intelligence and supporting them to use it more powerfully.

In place of the office, conference, and meeting rooms I work in today, we met in more exotic environments: grass or tin-roofed houses, village government offices, fields, the forest, or under the shade of the village meeting tree.

I embraced much of village life – in part, as a necessary function of my work and everyday living, and also out of respect for, curiosity about and a desire to connect with the people with whom I lived. I crossed crocodile-infested rivers and carried water in a bucket on my head. I collected firewood, wild vegetables and mushrooms with the women in preparation for cooking the evening meal. I learned quickly which species of tree would burn fiercely, adding aroma and flavour to the food, and which would create so much smoke that my eyes would sting and stream. I learned which plants and mushrooms would nourish and heal rather than poison.

Of course I had challenges aligning some differences with my world view. Luckily for me, our project manager Makange was a master at bridging the differences between our two worlds.

“The moment individuals engage in relationship, they engage to some extent in international politics: the meeting of different worlds with similar and different needs.”

Our first week working together was a steep learning curve. We circled each other, jostling over power and rank, and marking out the boundaries of our relationship. We were from two different worlds, and our rules of engagement were vastly different. After playing games for three days we finally sat down and worked it out. The atmosphere was a little cool for a day, but not so cool that a little humour couldn’t warm it.

On the morning of the first meeting we led together, I heard Makange chanting and singing in a whisper. I was curious and asked what he was doing. He shared his special magic ritual. It would allow him to speak the right words, so that all would hear each other and be agreeable. Whatever the reason, the day of that first meeting was incredible. We were meant to co-lead.

A local Msambaa himself, Makange knew the lay of the land.

“Throw off the bowlines, sail away from the safe harbour. Catch the trade winds in your sail. Explore. Dream. Discover.”

‘African time’ was one cultural difference that truly challenged me. I was careful to set appropriate meeting times for communities – no clashes with funerals, weddings, festivals, market or firewood collection days, no conflict with seasonal field work or daily house work. Yet meetings still habitually started at least an hour later than scheduled. I knew that people in the village didn’t have watches or clocks, but was still frustrated by the relaxed attitude toward time.

It took us an hour or two to walk to hilltop villages. We would wait another two before starting a meeting which often lasted two to three hours. Afterward we would make the long trek back home through forests filled with snakes, attacking safari ants, and the occasional angry hornet. Often, a fallen tree or swollen river diverted us.

One day, in frustration, I suggested to Makange that we simply arrive to meetings an hour later than scheduled. I don’t know how he managed not to laugh! Having worked closely with Europeans for many years, he also knew something of the wazungu obsession with time.

With a twinkle in his eye and his usual sense of humour, he simply reminded me of the ‘bush-phone.’ We needed to be at the meeting place at or before the scheduled time. This would initiate the passing on of news of our arrival from house to house and field to field. Gradually everyone would receive the news and come in from the fields, get washed, eat, and then come to the meeting.

Our challenge was to honour the less hurried pace of life and allow time to connect with people individually, while also appreciating my impatience and faster-paced, task-orientated way of doing things. Makange and I created a strategy that worked for us as a pair and for the community as a whole.

Being the faster walker on the mountain pathways, I would arrive first to greet the elders sitting in the shade of the meeting tree. As I waited for Makange, I learned the joy of watching the world go by.

Upon his arrival, he would take up conversation with the elders. I would then be off to become part of the bush phone, moving from house to house, greeting the women, being welcomed to food, and initiating discussion about the meeting at hand.

If the meeting took an interminable time to get started, I could always sit in the shade with my latest novel and disappear into yet another world. It wasn’t quite the accepted behaviour, but since I was often seen as an alien anyway, I could get away with some odd behaviour from time to time.

My strange look, sound, and smell and weird way of speaking Kiswahili and the local Kisambaa language served to entertain the village children and some adults.

“Not until we are lost do we begin to understand ourselves.”

Makange and I learned to bridge many differences over the four years we lived and worked together. It wasn’t always as easy as the agreements we made over African time, and it wasn’t always pretty!

I often wondered Makange tried out his magic with me. Once, I found him trying to catch my first footprints of the day. Over the years I found small newspaper-wrapped ‘medicine’ packages in strange places – under the driver’s seat of the Land Rover, and under my bed! When I asked about it, he told me not to worry, as his medicine never worked on me.

Through my experience in living in Tanzania and working with Makange, you might think that by now, I’d have learned to embrace the differences in all my professional and personal relationships.

Let’s just say I’m human – or perhaps still an alien – and a work in progress. I can still be shocked each time I discover I’m on another planet, speaking a foreign language, or worse still, that others are looking at me as if I’ve grown pointy ears. Ever had that experience with a work colleague? Generational, gender, cultural and personal differences can all be part of the territory in a professional environment.

What can we do to bridge the differences between our differing worlds and views of reality? As Fridjhon and Fuller suggest – travel. Whether you are actually visiting another country or simply exploring a different work environment, these travel tips can help to prepare you for the most eye-opening trips of a lifetime – the journey into another’s internal land.

Tips for travelling to diverse worlds

Most of us are so used to the personal and cultural values, norms and assumptions of our own internal world and culture that we spend little time truly exploring another world. Although I may have travelled a long way physically to be in a remote Tanzanian village, at times I was less than willing to travel emotionally.

Give yourself a vacation and visit a different viewpoint. I encourage you to try it. If it doesn’t turn out to be a vacation, at least it’ll be an experience. Remember you don’t have to take up residence. You are just visiting. You can return to your own land at any time.

Tip 2 – Leave your baggage at home.

Each of us is a complex land of preferences, beliefs, and values created through socialization, education, culture, religion, and personal experience. When you travel to another land, leave your baggage – your position on a topic or issue – behind. Your role is to remain open to experiencing the way things are from another perspective. So when you travel, please travel lightly. Your heavy baggage can stay at home, and all your creature comforts will be there for you when you return.

My baggage did always contain a book. Sometimes a flooded river meant I would be stuck somewhere for three days or more, and there was only so much Kiswahili I could speak each day without my brain bursting. Still, I was always conscious of the impact my reading had on those around me. I would explain that when I wanted to be alone with a book, I was okay, I wasn’t lonely and didn’t need rescuing. More often than not, I would put down my book, share the story and hear amazing stories in return.

Tip 3 – Dress for the climate.

Check out the climate before you go. Ever dressed for the tropics and then felt a little chilly? Anticipate differences from place to place. For instance, it makes as much sense for me to expect an immediate response from a laid-back introverted colleague as to expect fast food in my remote Tanzanian village (though tell that to a donor who visited our project).

Most of us agree on what attitudes make a good visitor to a foreign country, and the same attitudes apply when you visit a co-worker’s world. Bring your respect, open-mindedness, observation, curiosity, awareness and willingness to learn. Give yourself permission to not know everything and to be taught how it’s done in this other place. Find out what’s important in their world and the value of their way of doing things. Revel in the mystery and adventure of learning about a foreign land and another person.

Tip 5 – Be appreciative and willing to be influenced.

Notice what you appreciate about the other person’s way of being. What might be useful to bring into your partnership? What does another way of doing things have to offer? Be willing to be influenced by the other.

Tip 6 – Get an experienced guide.

While you can make the journey alone following tips, advice, guidelines and guidebooks, all of the greatest explorers of the world know that it’s often easier, quicker, less intimidating, and more rewarding to go with an experienced guide. If you are exploring a different work environment, a systems coach may be your best resource.

With practice, you can become a master traveller, growing in awareness about what’s important to you and others. Once you learn to appreciate other ways of perceiving reality, the real adventure begins. Your challenge is to intentionally evolve and co-create a new environment that brings the best of both worlds – as well as any exotics you wish to import from your travels.

As for me, I’m forever grateful for the time I spent with Makange in my remote Tanzanian village. Sadly, Makange died a year after I left Tanzania. In his honour, I continue to master my skill as an explorer, collaborator, and guide as I co-create partnerships that bridge the differences between worlds.

Kerry Woodcock, Ph.D., coaches pioneers and influencers to amplify the power of relationship and lead over the edge of change. As Principal of Novalda, she develops change leadership capability in organizations and social systems.